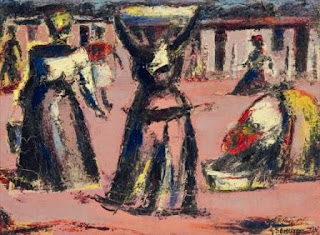 Special thanks to Adam J. Rankin, for his collaboration in the co-investigation of this report.
Context of agriculture and rural development in Colombia.
It is sadly paradox, that Colombia, a country that is privileged with an immense patrimony in cultural and biological diversity, with all the ranges of agro-climatic landscapes, with a coastline conformed of both the Caribbean and Pacific ocean, with a tradition of peasant, indigenous, afro-descendent and fisher-folk people who have a vocation to produce abundant and healthy food, is now contrastingly facing conditions of hunger, malnutrition and poverty, and that food-aid programs[1] are evermore institutionalised as a governmental policy.
[1] Relief and food-aid programs in Colombia have been highly criticized by NGOs, communities and indigenous authorities, particularly because of their ignorance of local peoples’ cultural practices, alteration of community governance structures, tendency to create food-dependency and the loss of agro-biodiversity due to the introduction of modified seeds, animal breeds and GMO contaminated food-stuffs. A more detailed discussion is given in the article: Revista Semillas No. 24/25, “Ni ayuda ni alimenta - Ayuda alimentaria en comunidades indígenas de Colombia”, Fernando Castrillón - Swissaid, Bogotá, June 2005.
View the complete text: http://www.esnips.com/doc/75cbb290-1e30-44a1-ba9a-7a51fe127027/COUNTRY-AND-CASE-STUDY-REPORT
Publicado por FUNDAEXPRESIONWOMAN en 18:38 No hay comentarios: 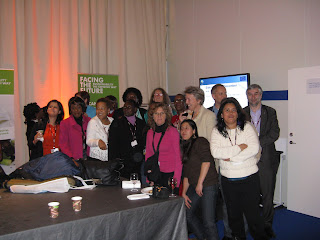 We have recently had the wonderful opportunity of connecting our community-based work in Colombia with two international women’s networks: GenderCC - Women for Climate Justice[1] and WLOE - Women and Life on Earth[2]. These social platforms are essential to unite the struggles and experiences of women groups around the world, on crucial issues such as climate change and biodiversity conservation. Moreover, we have managed to envision how these societal challenges are inter-connected and directly affect the livelihoods of marginalized peasant communities and women rights. Our joint vision as women has particular significance in terms of autonomy, empowerment, cultural identity, elimination of all forms of violence, preservation of biodiversity, water and life in general.

Therefore, for us as women’s groups and environmentalist movements, it was crucial to be able to participate directly and reflect upon two recent international summits which took place at the end of the year 2009 in Europe, with implications on a planetary scale: the 7th conference of ministers of the World Trade Organization (WTO) in Geneva and the UN Climate Summit in Copenhagen (COP15).


[1] GenderCC - Women for Climate Justice: Network for capacity building and awareness raising to empower women at local and national levels affected by the impacts of climate change, web-page: http://www.gendercc.net/
[2] WLOE - Women and Life on Earth: Network which aims to connect women’s organisations at an international level, share information and work for ecological health and social justice, web-page: http://www.wloe.org/ 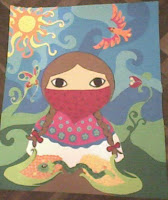 As well as a planetary proclamation for: “Another world is possible”, the participants of the Social Forum of the Americas cried-out: “Another America is possible”, and added: “Another America is possible and necessary”. The 3rd Social Forum of the Americas in Guatemala was a very rich and diverse scenario, and permitted us to listen and dialogue with inhabitants of America and really appreciate what they express and reclaim as social, cultural, women’s movements, indigenous people, environmentalists and supporters.

The Forum in Guatemala held in October 2008, was indeed an open space to elaborate proposals, to be able to exchange ideas, to enable groups to meet and to coincide on what is our collective position against the neoliberal system which has shown its ever deepening crisis. This dominating system is built-upon a patriarchal society and forms of corruption at all levels, as well as its oppression of grassroots movements, and especially the discrimination of women’s groups.

The report that I am presenting on women’s participation at the Social Forum of the Americas, is an opportunity for me and for WLOE and Fundaexpresion to comprehend which areas of the social movement encompass and are being pushed forward by women, as well as the difficulties and priority issues that should be addressed. There are so many topics to be discussed, but here we try to concentrate on a few of them.
View the complete text: http://www.esnips.com/doc/3044c690-ac8c-4143-9d76-aaa688152b99/WOMEN-GUATEMALA
Publicado por FUNDAEXPRESIONWOMAN en 17:54 No hay comentarios: